Years ago, the last heroic types failed to defeat Slith, the demonic overlord. Now, all peoples live as mindless slaves to him, and have for many generations. In this great absence of combat, your mind has been left to wander and you have started to realize who Slith is and what has happened to your people. Now you are free from his control and must defeat him once and for all!

The game is split into floors of a dungeon, which are procedurally generated. There are a few different dungeon generators used, so every now and then you will find a rare/strange layout. When you die in the dungeon your character is finished (permadeath).

All weapons and armor that you find in the dungeon is equipped by your enemies. There is no unexplained system where rats drop plate armor or where diamond daggers are just lying about all over the place unclaimed. Loot also scales up very quickly from level to level and each floor has a unique set. You aren't going to find that amazing artifact that suddenly makes the game easy, and likewise you are under no pressure to find it in the first place.

Like equipment, there is no creature that appears on two floors. There are also rare creatures that you might never see. No longer will you have to trudge through 5 meaningless rat/goblin/kobold floors to get to the interesting stuff. On the first floors you can expect to find Robotic Snowmen, Dual Wielding Sea Otters, and Crazed Martial Artists. As with gear, the enemies ramp up in difficulty quite quickly.

Skill (meaning skill with melee weapons or dodging etc) is separated from class. The player picks a skill proficiency (e.g. Magic) and then picks a class (e.g. Spacetime Nomad). There is absolutely no exclusivity in any way here, so a melee-elementalist is just as viable as a shield-cultivator. After this, the character can pick traits as they level up to add bonuses, such as faster healing or the ability to set enemies on fire.

Weapons can have abilities and effects attached to them, which automatically activate, and there are special abilities the player gains while leveling up, which correspond to character class. Weapons recharge over time, while player abilities recharge in between dungeon floors.

You can heal yourself up to 50%, but must find certain altars or campsites to fully heal yourself. There is also a system of limb damage in the game. You can heal a wounded leg, but you can't heal a crippled or dismembered limb without outside aid.

All actions (including walking) increase the player's fatigue. This acts as some kind of "clock" for the player but it is not overly imposing (if you become too fatigued you will merely pass out from exhaustion). It is nevertheless something that the player must be aware of. Careful play makes it less of a factor. There are two campsites per floor that the player can use to sleep and recover.

The game has an alchemy system as a pseudo-identification system. There are 10 ingredients, which have random alchemical color effects. Experimentation will lead the player to discover ingredients with the same colors and then they can create the corresponding item. Thus you won't know until you create a 'Red' item that it is a fire bomb for instance. Items you find, such as smoke bombs, are always identified. This means you don't have to spend the first X levels drinking potions of poison to get to the point where you can actually use strategy (as fun as that may be).

The game has 7 gods, which the player can worship with various effects and complications available.

There is actually a rich plot in the game, although it is not directly forced on the player. There are little snippets of information on certain levels to provide some kind of insight into what bosses you can expect to find and why they are your enemy.

The game is tile-based, where the tiles all consist of 8x8 resolution. This is enough to give players an idea of what their looking at, but maintains a lack of detail. You can see what equipment an enemy is wearing just by looking at them, so you won't be surprised that they are wielding a rare item. The interface is designed so that almost everything you need is always visible to you on the screen. You don't need to know keys to access the inventory or ability list because they are always visible. The game supports mouse and keyboard controls, including pathing and autoexplore.

There is a global tracker across all playthroughs that measures enemy "knowledge". When you have killed a lot of enemies, you gain a slim combat bonus against them on future characters. This is at the same time not enough to make a huge difference in the game, but enough to feel like all those lost characters at least contributed something. 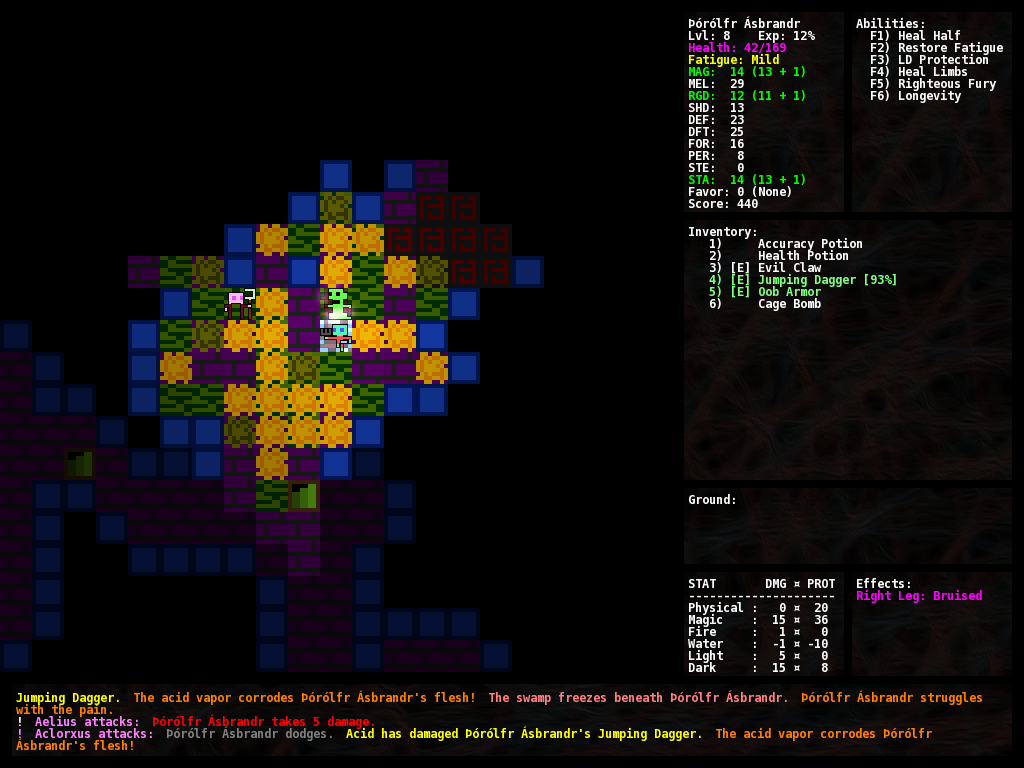