This clone of Moria (Amiga version) with the first 20 levels is free to download from the website.

Notable differences from the Amiga version of Moria :

. Completely different dungeon generation routines generating far more diverse patterns.
. Enhanced AI that varies in smartness according to type of monster.
. Synth sound effects.
. Saving the game is only allowed in the village so as to avoid perma-death yet still punish careless playing.
. Only a human wizard is allowed at character creation. . All code is rewritten from scratch in VB6 + DirectX. This is not a port.
. 32x32 pixel art tiles.

. All monsters, objects, spells are the same as in Moria except the end monster as it stops at level 20.
. Only the first two spell books are implemented (out of four in the original).
. The village has the same shops but the haggling, amusing at first but tedious in the long run, has been removed.
. Digging is allowed with a proper tool.
. Secret passages are present in all levels.
. Traps are found in many places.
. Word-of-Recall scrolls work in the same way as in Moria : beam back up to the surface and return to the lowest level reached.
. Identify scrolls are the only way to determine the true value of an item and to know if it is cursed.
. Shops can identify an item after the player has sold it to them.
. The quantity of identify scrolls is limited so risks have to be taken with unknown objects.


Oddities
The game is known to crash back to desktop just after character creation when the DirectX screen is set up on some machines.
No explanation was ever found for this behavior as there are no error messages. Older built-in Intel graphic chipsets seem to be prone to this glitch.
However the game also works on all versions of Windows starting from Windows98 up to Windows 10.
There is a slight slowdown in DirectX graphics after Windows Vista due to compatibility drawbacks
of older DirectDraw commands in more recent Windows versions. 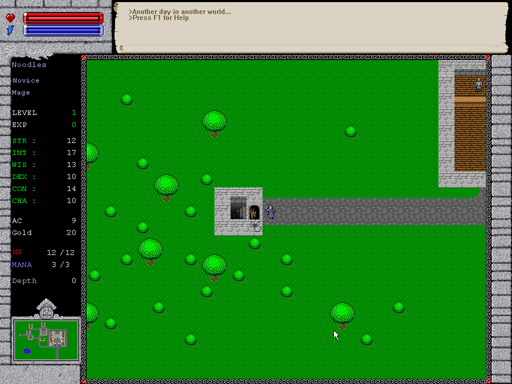 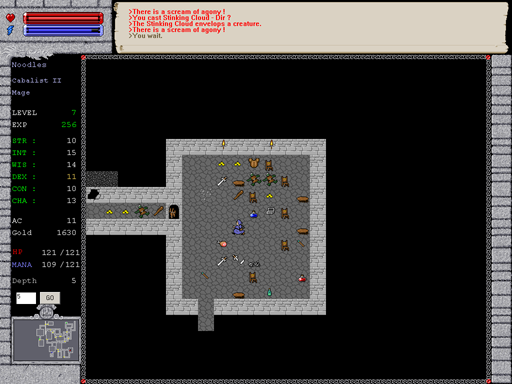 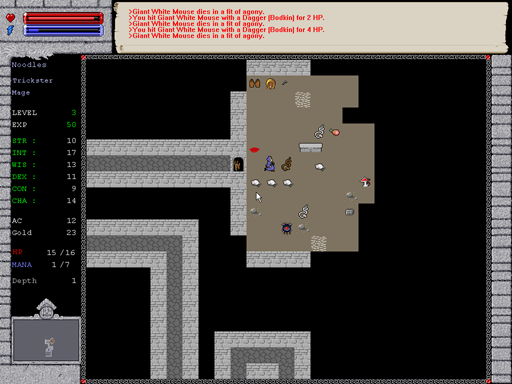