Difference between revisions of "Featured roguelike" 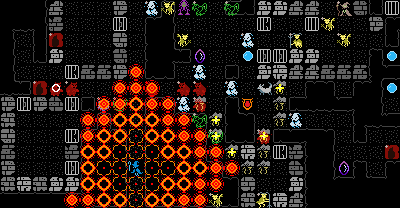 Rift Wizard is a turn-based roguelike which focuses on spell-based combat and character building.

Combat in Rift Wizard is tactical and puzzle-like, with fixed damage numbers and no fog of war.

Upon completing a level, the player has a choice of 2-4 rifts, all leading to different procedurally generated levels. Levels vary both in the loot they contain, and in the enemies that inhabit them. Matching your next rift to your build- and vice versa- can be the difference between victory and defeat.

Players gain skillpoints from completing levels- of which each run contains only 25. Thus players must be quite careful with their character builds, balancing their near term needs with long term goals, while also balancing versatility with synergy.