MidBoss adds an enemy possession mechanic to the traditional roguelike formula. Possessing other monsters and mastering their forms unlocks abilities to mix and match, allowing players to adapt to whatever procedurally generated loot and layouts the dungeon throws at them. Players can rely on a relatively stable progression of forms and abilities to unlock each time they play. 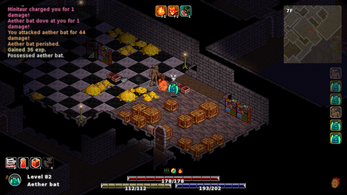 Shareable death cards, complete with stored stats, settings, and the seed value for a given run, allow players to try that run again, compete directly with friends, or simply start a new run with grave goods from previous attempts.

There are many customization options to suit players' preferences and needs for accessibility, including customizing the size of dungeon floors, key rebinding, colorblind modes, and allowing players to make cursed items stick once equipped.

MidBoss is available on Steam and itch.io.