Crossfire's development history started in mid-1992. It originally started as a Gauntlet clone developed by Frank Tore Johansen at the University of Oslo, Norway.

Crossfire started with just one indoor map (first a simple test-map, then the first real map, which got extended a few times) and then increased to 4 indoor-maps with one-way portals from level 1 to level 4. Upon clearing the last level, there was nothing more for the player to do. Spells were limited to magic bullet (the first spell), fireball, magic missile, burning hands and lightning bolt. Later on, when two-way portals were implemented, development and content contribution took off in all directions.

This change brought about a flurry of new local players (at University of Oslo, Norway) and resulted in many new maps, it exploded in all directions, including the first town and the first world (the one we have now is the third town and third world).

In the years of development that have followed, Crossfire has grown to encompass over 150 monsters, ~3000 maps to explore, an elaborate magic system, over 15 character types, a system of skills, and many, many artifacts and treasures.

One of the joys of Crossfire is the vast depth of development that has occurred over the many years. This has resulted in a diverse playing experience with often little to prepare players for whats to come. 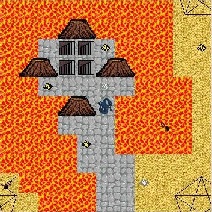 Crossfire RPG clients, as well as information for hosting your own server, are available at its website.