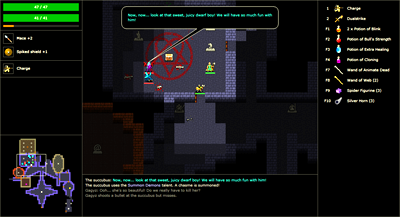 In Zorbus your goal is to delve deep into a dungeon, find a portal to a mythical place called the Zorbus where a mere mortal can ascend to demigodhood.

Important part of the living dungeon are the creatures. Creatures act intelligently, might fight each other, flee when threatened and try to gather their friends to overcome a threat. Most creatures can use items and also pick them up from from the dungeon floor. Creatures are not silent either but comment on things with speech bubbles.

You don't have to go to the fight alone but can recruit other creatures along the way.

The rule system for the game is slightly influenced by the d20 system used in the 3rd edition of Dungeons & Dragons. Zorbus has experience levels but no character classes (race is selected). On each level up, you point buy skills and talents (mostly combat maneuvers and spells).