Destined for humanity's next home, you must escape a titanic mothership — where an abhorrent lifeform has taken residence.

Escape from Aeon is a modern interpretation of the traditional roguelike model. Features include a turn- and point-allocation-based system, permadeath and a slim chance of survival. Early builds are available on itch.io and a Steam release is planned for the future.

In the far future, Earth's united nations observed a gigantic meteor heading toward the planet on a collision course. Efforts were already in place to colonize another world, but no viable planets were found within a few generations' span of time from Earth. The discovery of the meteor caused the nations to redouble efforts in finding a solution, and from this impetus, the fleet of Aeon ships were created. Massive, multi-generational colony ships capable of near-light travel and sustaining several synthetic ecosystems, launch from Earth just before the meteor incinerates the planet.

After an undetermined amount of time, the player wakes on an Aeon for routine maintenance, interrupted shortly thereafter via emergency override. Locked out from the cryochamber and with no responsive interfaces aboard the Aeon, the player sets out to determine the cause of the override.

In addition to traditional roguelikes, Escape From Aeon draws inspiration from science fiction and horror movies such as John Carpenter's The Thing and the Alien series.

The player will uncover details about the Aeon, Earth's plight, the player's location and what caused the override, as well as powering an escape pod and ultimately escaping the Aeon.

Escape From Aeon includes many codified roguelike mechanics, such as procedural level generation, permadeath, and a high degree of challenge. The game also implements an action-point turn system, similar to those found in Jagged Alliance 2's 1.13 modification and X-Com: UFO Defense.

RPG - As a role-playing game, the player gains experience through killing enemies and can level up several statistics, including Strength, Agility, Vitality and Insight. These stats change the equipment the player can use, the player's health, and other elements.

Turn-based - The player's actions — including movement, reloading a weapon, firing a weapon, using an item, etc. — are allocated through a pool of 100 points called Chronounits, or CUs. This pool can be modified through leveling up Agility and via modifications. The player's turn ends once he or she has exhausted all available CU, allowing for others to take their turns. 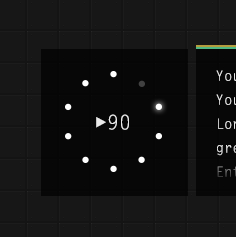 Environmental interaction - With enough firepower, some walls, doors and objects can be destroyed with associated consequences and/or advantages. Other elements and hazards, such as sludge, radiation and spore clouds, can help or hinder the player and enemies.

Modifications - The player can change his or her genetic makeup with mutagenic synthesizers or musynths, change suit properties with modules, and harness some aspects of an alien lifeform with infections. Each modification behaves similarly to familiar roguelike elements — musynths behave like traits, modules like wands, and infections like deities. See Items and Currency below for more details.

In EFA, you can select one of 3 character classes, with another unlockable class available. Each class starts with one F-Kit and health and adrenal stims.

Soldier - You've dedicated a large portion of your life to building physical strength. You're sturdy and capable of nearly any labor. You're also the product of a sheltered life, building your body in the finest facilities and never wanting for much. The stress of life aboard the Aeon has started taking its toll, and despite your practice, you don't feel prepared for what you might face. You start with a <module>, a ballistic pistol and decent armor. <stats>

Marksman - You've had a sharp eye for detail since you were young. Deft hands and natural dexterity led you to a string of successes, including your position as a respected architect. Your passion, however, always remained in sharpshooting. You trained on ballistic weapons but came to favor laser-based firearms for their speed, accuracy, and beautiful simplicity. Your naturally cool demeanor has started dissipating in light of the recent events on the Aeon. You start with <module>, a ballistic rifle and light armor. <stats>

Engineer - From your perspective, you aren't much more than an intern, but to anyone else, you're one of the minds behind the Aeon fleet. Your concepts and designs exist on the craft you've woken up on. You can capably predict its pathing and the methods it uses to calculate where to travel next, and you're familiar with its safety procedures and a library of codes and functions. Which makes waking to this particular situation much more dire than you could hope for. You start with 2 <modules> and a laser pistol. <stats>

Not much is known about the beings aboard the Aeon. Accessing the library in-game may shed some light on the things you've encountered.

Equipment in EFA is broken down into several categories.